Motorhome and Away
France Spain and Portugal 2011


After touring just through France last year we decided to head further south this year to Spain and Portugal with an initial diversion to Paris for a family event just before Easter. Despite travelling a month earlier than usual we had excellent weather for most of the trip bar the occasional thunderstorm and a couple of wet days.


After crossing from Dover to Calais on the impressive new P&O ferry Spirit of Britain we drove down to Vernon on the Seine and visited Monet's garden at Giverny, a riot of colour with spring flowers but no water lilies. Luckily we arrived early in the morning before the crowds but it was worth a diversion. We then continued to Versailles staying at the Huttopia campsite, quite expensive but we were able to travel into Paris easily on the RER train. We also visited the gardens of Versaiiles but the queues for the palace interior were so long we gave that a miss. Heading south we stayed at aires at Lôches, Brantôme and by the Canal du Midi, spending a night at a campsite near St Jean de Luz before crossing the border into Spain. Again this year we ended up in the middle of San Sebastian at lunchtime but managed to extricate ourselves on a new road (not on the satnav) and headed south over the mountains to Soria then via the gorge at Rio de Lobos ending up at Segovia. After visiting the city centre and looking at the Alcazar, cathedral and Roman aquaduct we continued southwest to Avila then across to the preserved mountain village of La Alberça where there was a free aire. We drove south through interesting hilly countryside then grassy plains to Caceres and across the border into Portugal visiting the fortified hilltop town of Marvão. We continued south across the Alentejo plains to the attractive historic city of Evora staying free at a couple of baragems (reservoir dams) and then stopping at an empty new campsite at Castro Verde, an interesting small town and a good centre for birdwatching. From there we approached the Algarve across the hills on an rough road to Monchique and down to Alvor on the coast near Portimão. It was far too busy for us there so we turned west and found a delightful remote beach for a nightstop before reaching Sagres and Cabo St Vicente, the south western tip of Europe where we watched intrepid anglers fishing from the top of the high cliffs. We continued up the west coast stopping overnight by the small resort of Odeceixe then the larger traditional Portugese resort of Vila Nova de Milfontes. We decided to head inland to avoid Lisbon returning to the coast at Peniche and Nazaré then inland again  to the shrine at Fatima. Heading north we returned to the coast at the pretty seaside town of Costa Nova with it's striped houses. We took another circuit inland to the Douro Valley and Vila Real before reaching the small city of Guimarães which we visited by taking the cable car down from the campsite situated on the hill of Penha. After visiting the coast at Vila do Conde and Viano do Castelo we turned inland again to Ponte de Lima visiting their annual garden festival for an amazing entry fee of €1 ! Our last stop in Portugal was the border town of Valençia de Minha where the many shops were all seemed to be selling the same ranges of bed linen, towels and baby clothes.
Back in Spain we drove along to the coast road to the resort of Baiona stopping to look at the old monastery by the sea at Oia, and took the autoroute to avoid the large port of Vigo and on to Santiago de Compostela where the campsite was within walking distance of the city centre. As it was Ascension Day the museums and art galleries were closed but there was a street festival with jazz bands, a classical orchestra and lively traditional Galician folk dance troupes to entertain us (and the many pilgrims who had followed the Caminos of St James) on a rare warm and sunny day as it's reputedly one of the dampest places in Spain. Definitely an interesting place to visit. 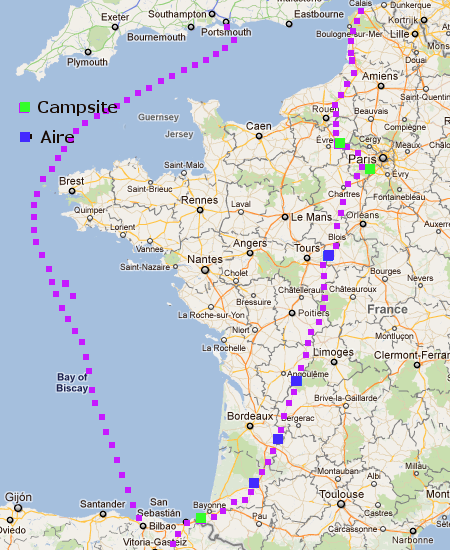 Our 2011 route through France 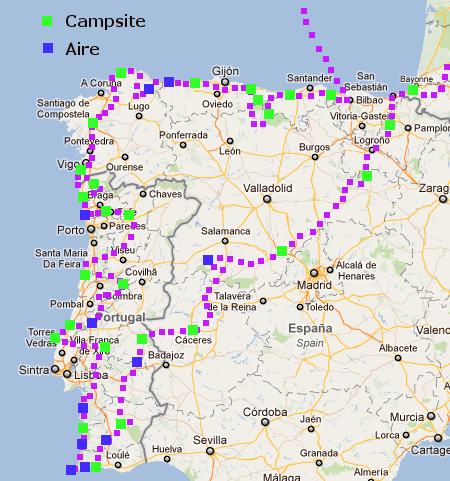 Our route through Spain and Portugal 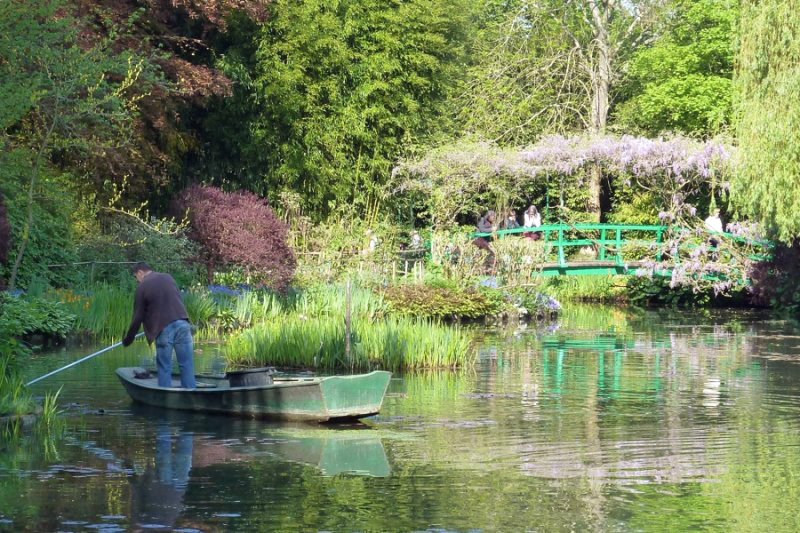 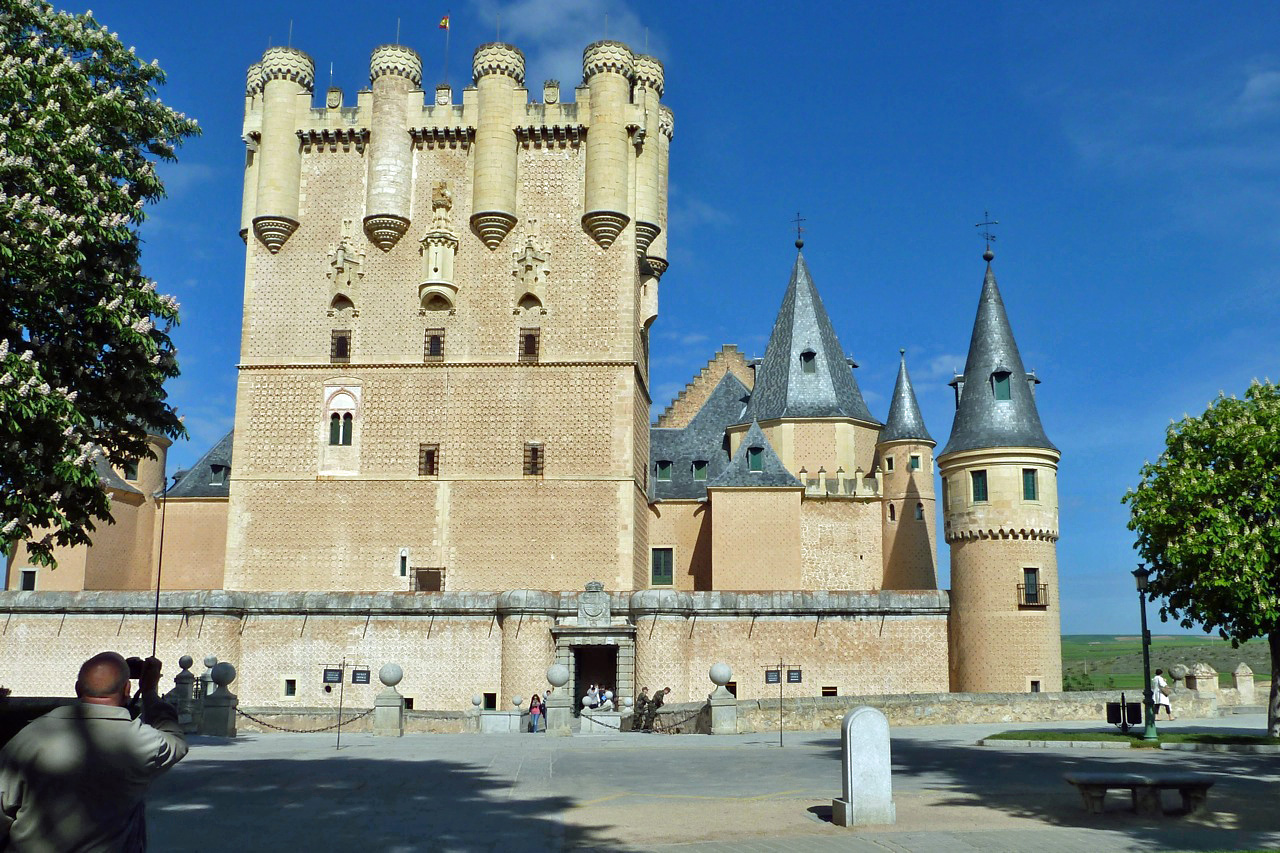 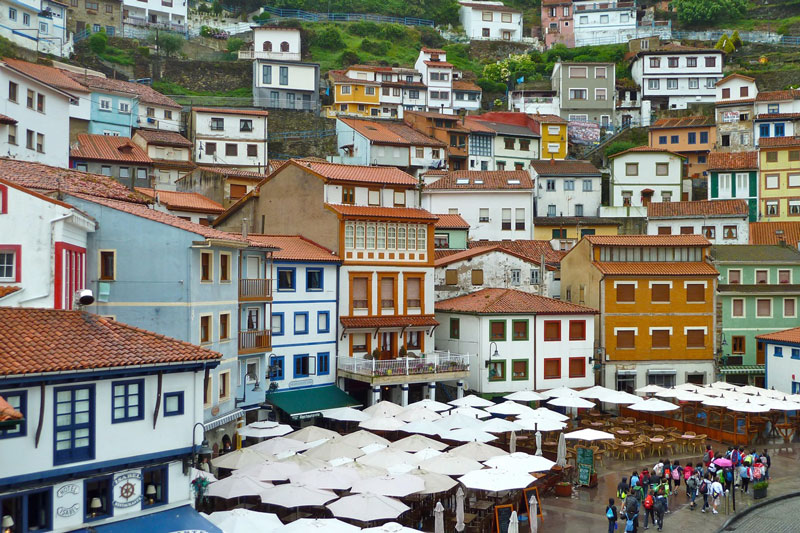 From there we headed to the northern coast via Betanzos a small town with typical glazed balconies on the old buildings, and a circuit of Ferrol to find a supermarket (which had a height barrier!). We then continued along the coast via small resorts with Cudillero being the most picturesque with its colourful houses on the hillside overlooking the harbour. A final highlight of the trip was the drive around the Picos de Europa taking the winding road through the narrow gorges to Riaño and the spectacular drive across the mountains to Potes. From there we visited Fuente Dé and took the cable car up 750 metres to the mountain ridge, luckily the clouds clearing briefly whilst we were at the top.

We continued along the coast to Comillas where we visited the amazing Gaudi designed house of El Capricho and stopped in Santillana del Mar before our last night in Spain and the ferry home from Bilbao to Portsmouth.

Part 1 Through France and Central Spain >>